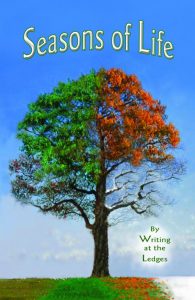 By Ray Walsh for LSJ

Local writers are at the center of attention in a new paperback anthology of prose and poetry.

“Seasons of Life” by Writing at the Ledges (Riley Press. $12.99) includes all new works by members of the Grand Ledge-based writers’ group.

It’s an invigorating mixture that’s full of poetry, reminiscences, ponderings and fiction by 24 talented authors ranging in age from 17 to 88.

This enjoyable collection is arranged seasonally from spring through winter. The cover image by Patrick Reed Designs is sure to attract considerable attention.

Many participants may seem familiar as they were published in “Small Towns: A Map in Words,” a collection that came out in 2008.

Carolyn Tody’s “Music of the Wind” focuses on the Great Alaskan Earthquake of 1964, with very descriptive imagery of damage and destruction. K.L. Marsh’s efforts include nine poems or essays. There are also emotional pieces by Lorraine Hudson, who’s written popular children’s chapter books under the pseudonym Judith Wade.

Jesse Goldberg-Strassler, the radio broadcaster for the Lansing Lugnuts, showcases five memorable pieces, including “Off Air” a poem that evokes fond memories of Ernie Harwell’s broadcasting.

Haslett author Carolyn Nye-Shunk and Okemos writer Karen Marie Duquette are among other writers whose works are included.