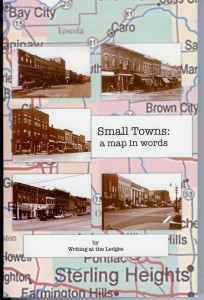 By BILL CASTANIER for City Pulse on November 26 2008

From John Cougar Mellencamp to Garrison Keillor, small-town life in the Midwest has inspired its fair share of songs, stories and other creative expressions. Now a group of local writers is sharing its spin on the experience with “Small Towns: A Map in Words,” a 303-page anthology of poetry, essays and short stories (fiction and non-fiction) by members of Writing at the Ledges that offers readers big slices of small-town life in all of its glory and mishaps.

The collection cuts to the essence of small towns, whether it’s Rosalie Sanara Petrouske’s powerful poetry or Candy-Ann Little’s crime novella, which was inspired by a group of regulars at a local café who knew she wrote “romance” but thought she should try something that would interest them.

Unlike many writing-group anthologies, the work in “Small Towns” was all written specifically for the collection. The book is divided into themes, such as “Water’s Edge,” “Corner Café,” “Country Roads” and “Main Street.” The section “At the Water’s Edge” begins with the poem “Along the River’s Edge” by Petrouske, who co-edited the anthology with Little. Petrouske, a writing instructor at Lansing Community College, grew up along the shores of Lake Superior and places special significance on the importance of water. Anyone who knows the reaches of the Grand River as it rolls through Grand Ledge will recognize her poetic descriptions.

“In the upper reach amongst the swift water/algae clings to rock, smooth — polished/ almost black by rubbing of water and time/ evergreen, moss, pine — this is the river’s color.”

Later in the chapter, contributor Randy D. Pearson offers an oddly titled short story, “Lasagna and Sex Therapy,” about a homeless person. The section also includes Jan McCaffrey’s poetic ode to a smaller body of water, “Muddle in the Puddle,” which recalls fond memories of the fun a puddle can be.

The chapter “Corner Café” not only points to a small-town institution, but also the origins of Writing at the Ledges, which Petrouske and Little dreamed up while sitting and drinking coffee in a café in the early 2000s. “Since then the group has been growing and growing,” Petrouske said.

The group meets at 11 a.m. every third Sunday of the month at Ledge Craft Lane in Grand Ledge. At each meeting, members bring what they are working on to read to the group. “Most people bring things to share, and we are very encouraging to new people,” Petrouske said.

Members come from Grand Ledge and many surrounding communities, including Mason, Okemos, Holt and Lansing. They all have their own reasons for writing. Little said she had no desire to be a writer until the birth of a stillborn daughter. She began keeping a journal as therapy and then began writing what she knew: romances. Since then, she has completed 10 manuscripts. “I decided to write about my experience in fiction,” Little said. “I had my characters going through it, and for me it was a grieving experience. After that I was never able to give [writing] up.”

Little said the group has helped her writing, and she wants to encourage other writers to grow. “It’s great to see them take that step forward, so it becomes more than a hobby until they feel secure enough to send things out (to publishers),” she said.

The editors say the self-published anthology, available at local bookstores around Greater Lansing, is selling well and a second printing is in the works. But they don’t plan on jumping into another book soon. For now, the editors say they’ve agreed to “just enjoy this book” and enjoy the work of area writers, like Dian Bonofiglioi, who in her poem “Thankful Hearts” writes:

“The junipers were laden with heavy mounds/of snow the color of alabaster, looking like/chandeliers all covered up for the season … .”