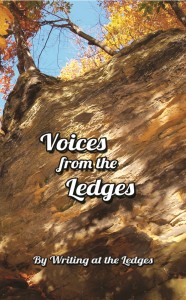 The Grand Ledge writers’ group, Writing at the Ledges, thinks big — and thinking big this year resulted in a 387-page collection of essays, poems and short stories. Rosalie Sanara Petrouske, a founder of the group  and an associate adjunct professor of English at Lansing Community College, said the collection is the third to be published since Writing at the Ledges was formed in 2005.

Since Petrouske has helped compile and edit all three editions, in addition to contributing her own work, she is in a position to make informed observations. She said she believes this new edition, “Voices from the Ledges,” shows significant growth for several writers, including her.  Petrouske contributed five pieces, including two poems, to this year’s collection. One of those pieces, “The Hike,” stands out as a dark story of retribution with a clever twist.

As an avid and accomplished hiker — including trips in the Upper Peninsula’s Porcupine Mountains —Petrouskie decided to set her short story in the U.P. In the story, a man and woman leave together on a simple day hike, but old tensions surface and the trip ends in disaster. Petrouskie has come close to emulating Raymond Carver’s masterful short stories about lives not well lived — or even well executed. The reader gets to decide the intentions and the result in the story.

Petrouskie said that type of short story was something new for her, but she wasn’t the only writer who expanded her repertoire, or even her writing skills. She cited Shelby Pontius, who was a first-timer in the last collection as a high schooler, but is now a student at Michigan State University.

“I’ve enjoyed watching her grow as a writer,” Petrouskie said.

She also pointed out a couple of new ideas that made it into this year’s collection, including the inclusion of three writers from Everybody Reads’ “Save the Independent Bookstore” short story writing contest this past year, which attracted 57 entries. The top three finishers were awarded publication rights in “Voices from the Ledges.”

The Grand Ledge writers’ group, which is in its eighth year, has grown to more than 30 members, precipitating a move to larger meeting space in the Trinity Episcopal Church in Grand Ledge. New members are still welcome, and anyone interested should visit the group’s website, writingattheledges.com.

“The group has grown over the years and is pretty free with feedback,” Petrouskie said.

She said she finds the feedback positive, and said that the group helps writers identify something in their writing that may be holding them back. She said she knows that the group has helped her with feedback with a novel she is working on that takes place in Michigan’s Upper Peninsula in the 1970s.

“It’s a coming-of-age story, and I get good feedback, like, ‘Would a teenager talk like that?’” she said.

The group meets once a month to review work and conduct writing exercises that help build skills. Several of the members, including Petrouskie, have spun off into a group dedicated to working on novels. She also envisioned a project that would involve the entire writing group creating a single novel comprised of all the group’s members taking turns writing individual chapters.

One of the advantages of a collection is that all the work is different, ranging from humorous pieces to more emotional renderings. Jim Wiljonen, who has only been a member of Writing at the Ledges for two years, contributed four creative fiction pieces to the collection. This style of writing is quite the departure for Wiljonen, who spent 15 years at WKAR as a broadcast journalist. One of his pieces, “A Memoir: Baseballs Have Feelings, Too,” is a delightful romp into the life of a baseball. In one paragraph, the baseball invokes a legendary Detroit Tigers pitcher.

“Mark Fidrych would have listened,” Wiljonen writes. “He would’ve heard me. ‘The Bird’ would have cared, but not this guy.”

Petrouskie said another aspect of the group that impresses her is its diversity, such as the differences in ages, backgrounds and interests. She pointed out that the youngest writer is barely in her 20s and the oldest member is, well, more grandfatherly.

One Book, One Community selection made

Debut novelist Kevin Powers’ “The Yellow Birds” was selected as this year’s One Book, One Community read for East Lansing. Community members can meet Powers, an Iraq war vet, at a community talk and book signing at the East Lansing Hannah Community Center 7 p.m. Aug. 25. The next day he will address the incoming MSU freshman class in the Jack Breslin Student Events Center. Both events are free and open to the public.