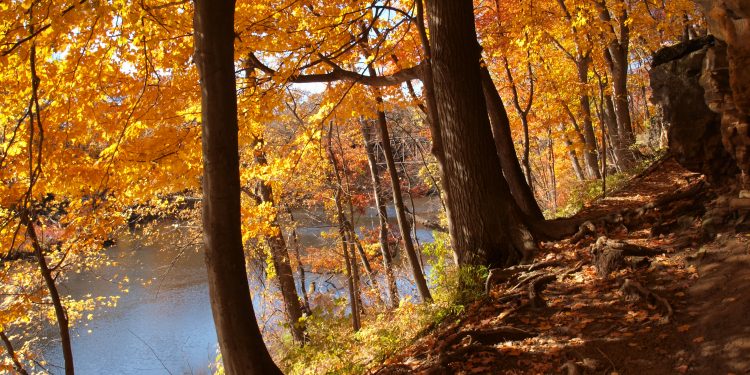 One year later, Writing at the Ledges is stronger than ever.

“As the co-founder, I have watched this group grow from a handful of aspiring authors sharing their poetry and stories, to an eclectic collection of nearly 40 members (who fortunately for us, do not all show up at the same meeting),” Petrouske said.

“From playwright Phil Kline to poet Kerry Tietsort, we have an amazing and talented group of people.”

Everyone is unique and has a different writing style. Where short story writer and first-time novelist Randy D. Pearson usually finds a way of weaving humor into his pieces, Susan L. Kaminga has an uncanny knack at finding the perfect rhyme for her engaging children’s poems.

“When I first conceived the idea of starting the group with a friend back in 2005, I never thought it would take off the way it has,” Petrouske said.

One of the early goals was to self-publish an anthology. In 2008, the group’s dream was realized when “Small Towns: A Map in Words” was released to rave reviews.

“We had 14 authors contribute their short stories, essays, and poetry to this book, which sold so well we had to do a second printing,” Petrouske said.

By way of contrast, this year’s new anthology “Seasons of Life” has 24 authors, with most of the original 14 Small Town’s authors contributing pieces.

The poems, essays, and short stories in this new collection are some of the group’s finest. It can be found at several area retailers, including Lamb’s Gate and the Book Bodega.

“We will also be doing several book signings. Look for members of the group at this year’s Island Art Fair on Saturday, Aug. 6, where we will have a booth for the third year in a row,” Petroske said.

“I am filled with great pride whenever I go to the Book Bodega, a small but fantastic bookstore in downtown Wacousta. On a stand-alone bookshelf sits every book our Writing at the Ledges members have appeared in.”

There are novels, like Phil Kline’s Curse of the Kitsune, Randy D. Pearson’s Driving Crazy, Judith Wade’s Mermaid Island series, and Jan McCaffrey’s Illusions of Murder. Next to those are anthologies with the work of Susan Kaminga, Lori Hudson, Janice Sykes and Rosalie Petrouske.

“It is a great testament to the talent and creativity of our little Grand Ledge writers’ group.”

Many of Writing at the Ledges’ members first joined because, as Lori Hudson says, “I can talk about my passion (writing) with like-minded people.”

For others, such as Randy D. Pearson, it helps keep him motivated.

Pearson says, “It forces me to write more. I find sometimes I have a good idea in my head, but don’t feel motivated to actually write it. Now, I think, Oh, I can’t wait to read this to the group!”

Newcomer Sandy Kallen wanted “To see what it was like to be with others who wrote, to learn and perhaps become more structured about the act of writing.”

Grand Ledge author Janice Sykes notes, “One of the best aspects of the group is how everyone works so hard to help each other develop their writing. The positive support and the way the group acts as cheerleaders for each others’ successes makes for a very comfortable atmosphere.”